The rock ‘n’ roll pioneer was known for hits like “Ain’t That a Shame” and “I’m Walkin’.”

Fats Domino, the leg­endary American pianist and singer-song­writer, died Tuesday. He was 89.

Domino’s fam­i­ly con­firmed his death to WWL-TV news anchor Eric Paulsen, who shared the news on Wednesday morn­ing. Domino’s daugh­ter told Paulsen that her father died peace­ful­ly sur­round­ed by his fam­i­ly and friends.

Domino, con­sid­ered a pio­neer of rock ‘n’ roll, was best known for his ren­di­tion of “Blueberry Hill” and for hits like “Ain’t That a Shame” and “I’m Walkin’.” Throughout his career, he sold more than 65 mil­lion records and had 37 Top 40 sin­gles. In 1986, Domino was induct­ed into the Rock & Roll Hall of Fame, and received a Grammy Lifetime Achievement Award in 1987.

As the Rock & Roll Hall of Fame not­ed, Domino helped “put his native New Orleans on the map dur­ing the ear­ly rock and roll era.” He was con­sid­ered by Elvis Presley to be the real king of rock ‘n’ roll, with Presley once call­ing him “one of my influ­ences from way back.”

Following the news of his death, trib­utes from fans, includ­ing a few famous names, poured in on social media.

“You helped pave the way for new orleans piano play­ers… see you on top of that blue­ber­ry hill in the sky,” fel­low New Orleans native Harry Connick Jr. wrote on Twitter. 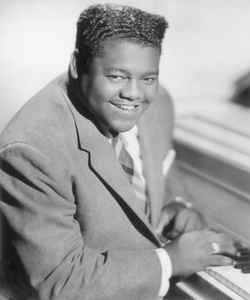 Words fail me in this moment of deep heartache and sad­ness. We have lost a leg­end. One of my heroes. New Orleans’ Fats Domino is dead.

Born into a musi­cal fam­i­ly on Feb. 26, 1928, in New Orleans, Louisiana, Antoine “Fats” Domino was the youngest of eight sib­lings. He learned to play the piano as a young child, and by the age of 10 he was already con­tribut­ing to New Orleans’ vibrant music scene, per­form­ing in honky-tonks for pen­nies. It was at one of those honky-tonks ― the Hideaway Club, accord­ing to Rolling Stone ― where he earned the nick­name “Fats” from band­leader Bill Diamond.

As not­ed on Domino’s offi­cial web­site, Diamond chose the name “Fats” because it was “a sym­bol of impor­tance and would be con­sid­ered to be a classic.”

In order to sup­port his music, Domino quit school when he was 14 and took on odd jobs every­where from an ice truck to a bed fac­to­ry. It wasn’t long before he became pop­u­lar in the music scene along­side greats like Professor Longhair and Amos Milburn.

In the mid-’40s, Domino joined a band with trum­peter Dave Bartholomew, who helped arrange Domino’s record­ing con­tract with Imperial Records. The two would go on to become writ­ing part­ners, with Bartholomew work­ing as Domino’s pro­duc­er. Together, they wrote and record­ed Domino’s first sin­gle, “The Fat Man,” in 1949, which went on to sell a mil­lion copies ― the first rock ‘n’ roll sin­gle to do so.

“My first impres­sion was a last­ing impres­sion,” Bartholomew said of Domino in a 2010 inter­view with The Cleveland Plain Dealer. “He was a great singer. He was a great artist. And what­ev­er he was doing, nobody could beat him.”

Domino’s musi­cal style was inspired by the likes of pianist Meade Lux Lewis and singer Louis Jordan. However, he had cre­at­ed a sound all his own that no doubt con­tributed to his mas­sive success.

As rock ‘n’ roll music gained pop­u­lar­i­ty in the mid-’50s, Domino already had a num­ber of R&B hits under his belt. His first album, “Carry On Rockin’” was offi­cial­ly released in November 1955 and reis­sued as “Rock and Rollin’ with Fats Domino” in 1956. That same year, Domino released a record­ing of “Blueberry Hill,” (a 1940 song writ­ten by Vincent Rose, Al Lewis and Larry Stock), which would go on to become his biggest hit. The sin­gle held the No. 1 spot on the R&B chart for 11 weeks and reached No. 2 on the Top 40 chart.

Over the years, his music was cov­ered by count­less artists, includ­ing John Lennon, Norah Jones and Cheap Trick.

Throughout the 1960s, Domino released music reg­u­lar­ly, and accord­ing to Rolling Stone, he played six to eight months of the year through the mid-’70s.

He also received The National Medal of Arts at The White House in 1998 from President Bill Clinton.

As a native of New Orleans, Domino was one of the thou­sands affect­ed by Hurricane Katrina in 2005. The per­former stayed in his home in the Lower Ninth Ward and was res­cued by a Coast Guard helicopter.

Following the nat­ur­al dis­as­ter, Domino released a ben­e­fit album in 2006, “Alive and Kickin’,” to raise mon­ey for the Tipitina’s Foundation. In 2009, a ben­e­fit con­cert meant to raise funds for rebuild­ing schools dam­aged by Katrina was orga­nized in his name.

Domino was mar­ried to Rosemary Hall from 1948 until her death in 2008. Together, they had eight children.