Police are treat­ing the recent death of Justice Sheila Abdus-Salaam, the first African-American woman to serve on the high­est court in New York, as “sus­pi­cious,” offi­cials said this week.

Abdus-Salaam was found dead last week after her hus­band had report­ed her miss­ing ear­li­er in the day, accord­ing to CBS New York. Police said her body, which they found on the shore of the Hudson River near Harlem, had no obvi­ous signs of trauma.

Police are treat­ing her death as “sus­pi­cious” because there was no imme­di­ate indi­ca­tion of sui­cide or homi­cide, the NYPD said.

“We haven’t found any clear indi­ca­tions of crim­i­nal­i­ty, but at this point we can’t say for sure. We’re hop­ing if any­one could shed any light into the hours before her dis­ap­pear­ance, it would help us estab­lish what hap­pened,” NYPD spokesman Stephen Davis told the New York Post.

The NYPD 26th Precinct tweet­ed a pub­lic appeal for assis­tance on Tuesday, describ­ing what Abdus-Salaam was last seen wear­ing and encour­ag­ing any­one with infor­ma­tion to con­tact authorities.

The #NYPD is seek­ing info on the death of Judge Sheila Abdus-Salaam. Anyone with info is asked to call our detec­tives at the num­bers listed.

Police ini­tial­ly treat­ed Abdus-Salaam’s death as a sui­cide, though a spokes­woman for the city’s med­ical exam­in­er said the results of an autop­sy con­duct­ed last week were incon­clu­sive, The Associated Press report­ed. The inves­ti­ga­tion is ongoing.

New York Gov. Andrew Cuomo (D) appoint­ed Abdus-Salaam, a vet­er­an judge and lawyer, to be an asso­ciate judge on the Court of Appeals in 2013. In a state­ment released last week, Cuomo called his col­league a “trail­blaz­ing jurist” who fought for a fair and just New York.

“As the first African-American woman to be appoint­ed to the state’s Court of Appeals, she was a pio­neer,” Cuomo said of the 65-year-old judge. “Through her writ­ings, her wis­dom, and her unshak­able moral com­pass, she was a force for good whose lega­cy will be felt for years to come.”

Justice Sheila Abdus-Salaam was a trail­blaz­ing jurist and a force for good.

Abdus-Salaam grew up in a poor fam­i­ly of sev­en chil­dren in Washington, D.C., accord­ing to the New York State Bar. She went on to grad­u­ate from Barnard College in 1974 and received her law degree from Columbia University in 1977.

She start­ed her impres­sive legal career as a staff attor­ney at East Brooklyn Legal Services Corporation, before going on to serve as an assis­tant attor­ney gen­er­al in the Civil Rights Bureau of New York State’s attor­ney general’s office and, lat­er, as gen­er­al coun­sel for the New York City Office of Labor Services.

In 1991, Abdus-Salaam was elect­ed as a Civil Court Judge for New York City and served there until she was elect­ed in 1993 to the Manhattan Supreme Court, where she served for 15 years.

She was appoint­ed by Gov. David Paterson as asso­ciate jus­tice of the appel­late divi­sion in 2009. Cuomo appoint­ed her four years lat­er to serve as one of sev­en judges on the state’s high­est court, the Court of Appeals.

“Throughout my legal career, I have sought to uphold the laws of our state and treat all those who appear before me fair­ly and with respect and dig­ni­ty,” Abdus-Salaam said at the time.

“Judge Abdus-Salaam saw clear­ly how dam­ag­ing it was to keep LGBT par­ents from their chil­dren,” Lambda Legal wrote in a blog post. “We owe her a tremen­dous debt of grat­i­tude. She touched the lives of many New Yorkers; her lega­cy will live on.”

Carl Heastie, the first African-American to serve as the speak­er of New York State Assembly, said in a state­ment last week that Abdus-Salaam was “high­ly respect­ed” and an “inspi­ra­tion to many.”

“Her pass­ing leaves a void that will be dif­fi­cult to fill,” Heastie said. “This is a sad day for all New Yorkers.” 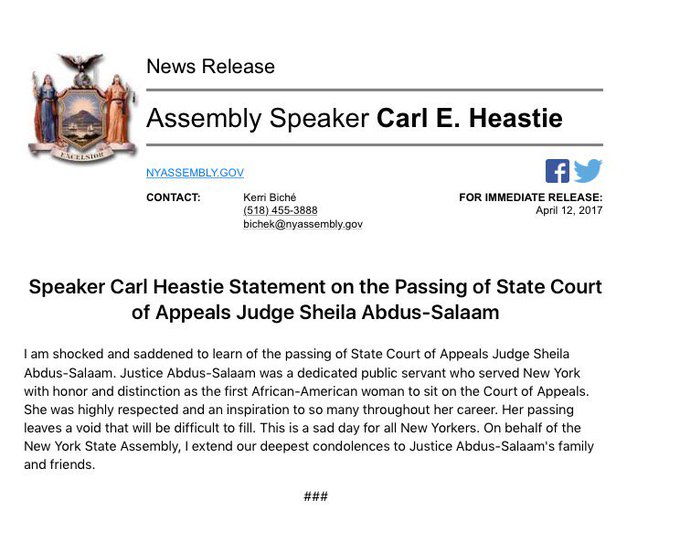 CORRECTION: This arti­cle pre­vi­ous­ly stat­ed that Abdus-Salaam was Muslim. Her first hus­band was Muslim and she kept his sur­name after they divorced, but she her­self had not con­vert­ed, accord­ing to a court spokesman who spoke to The Huffington Post.